[Texto disponible solo en inglés] Here is the report of the fourth edition of Live Cinema Festival held in Rome from September 21st to 24th, 2017 , in the spaces of MACRO – Museum of Contemporary Art of Rome in Via Nizza.

8 participating nations, 14 artists, live cinema performances, screenings and workshops for a festival that reflects the spirit of our era in which technology has invaded every aspect of our life: for the second consecutive year from September 21 to 24, it returned to the MACRO – Rome’s Contemporary Art Museum “Live Cinema Festival” the international event focusing on the most innovative live-audio performances,.

Live Cinema is a unique review of its kind that investigates and promotes all the artistic phenomena attributed to the term “Live Cinema” through unpublished performances or for the first time presented in real time in Italy. Performance that breaks the rules of traditional narrative definitively, aim to arouse sensations and emotions, favor a sinesthetic approach.

The event is produced by Flyer Communication with the support of the European Commission’s Creative Program, the Free Hardware Foundation, the French Institute of Italy, the Austrian Cultural Forum, the Polish Institute of Culture and a local and international network linked to performance video audio and the new forms of experimentation of new technologies in the artistic and cultural sphere. “Live Cinema Festival 2017” is sponsored by Sovrintendenza Capitolina ai Beni Culturali and is part of the Estate Romana program promoted by Roma Capitale – Assessorato alla Crescita Culturale and realized in collaboration with SIAE. 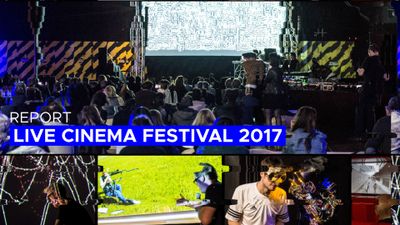