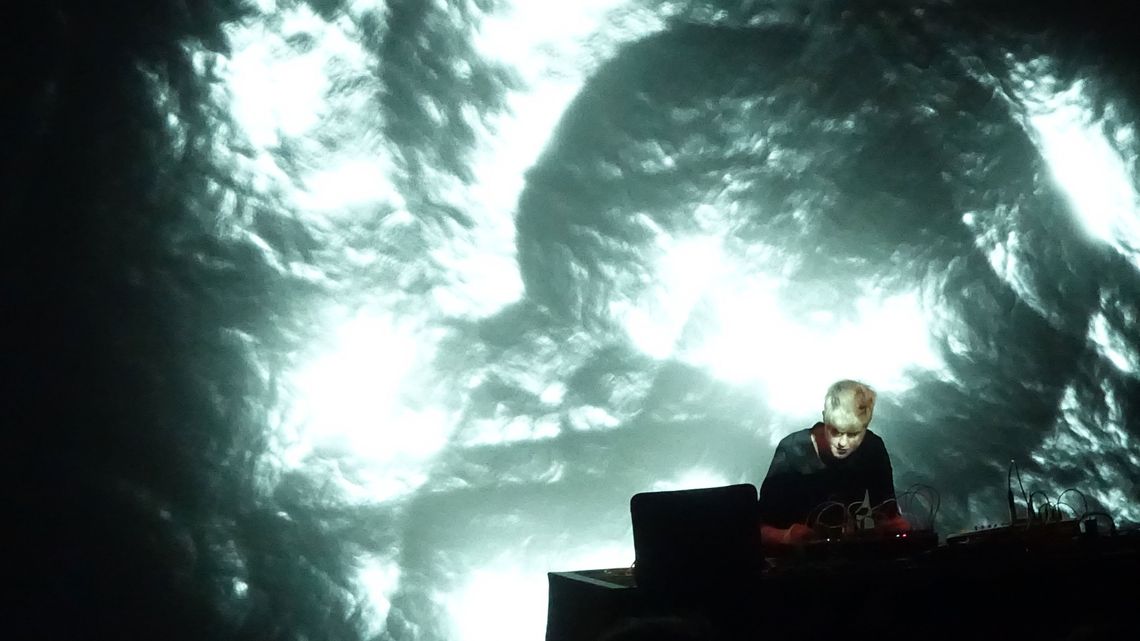 [Texto disponible solo en inglés] Overview, audiovisual performance : electronic music and generative video (3D).
Annabelle Playe performs live music from a live electronic devices.
The music oscillates between electronic, electroacoustic, drone and noise.
Sound, chaotic or pulsed masses, enveloping timbres are connected to a reactive 3D audio surface, created by Hugo Arcier, and animated according to the musical parameters. Some sounds distort the surface, others generate colors that diffuse on it.
Overview : an odyssey, a quasi-nuclear energy that disturbs our perception of space, questions our posture in the world, electrifies the fabric that connects essence, existence and universe.
Music and images are in synergy to develop a force sometimes hypnotic, sometimes chaotic leading us to cross a wall of sound, a dazzling, to finally go to the other side.

Black box theatre (no proscenium)
1 stage platform : 2,5 meters x 1 meter (Riser need to be masked with black fabric)
Sound
Two (2) XLR line
Two (2) side monitors on Two (2) different mixes.
Four (4) channels of 31 band graphic EQ; 2 for P.A. and two for side monitors.
One (1) mixe for video.
Video
1 video projector 5000 lumens minimum. Resolution 1080p
Large projection screen on stage behind performer : should fill the width of the stage, and go down
to about 50cm from the ground minimum size 6m x 4m
Cabling HDMI video from sound board(Video comes out from company's computer connected to
sound console)
BACKLINE
One desk lamp with white light

Music The music will unfold through different sound planes, from mass to filaments, extremely chaotic or pulsed materials to enveloping timbres, drones. Sound is here a physical experience of its strength, its density, its intensity, its brutal variations so as to "shift" the perception of the viewer towards other more bitter, contrasted, even violent territories to the point of daring. I want to create a field of movement to change auditory cues and take the listener into forms of audible vertigo. On the other hand, I will discuss the notions of remoteness and immersion through the use of filters. Annabelle Playe Video The idea is to create a reactive 3D audio surface that is animated according to the music through several parameters. Some sounds distort the surface, others generate colors that diffuse on it. In addition to the response to music, the surface has its own life and evolves autonomously as the performance progresses. A part of random makes that its shape and its color is each time different. Hugo Arcier