[Texto disponible solo en inglés] Share Project is announcing the XIII Share Festival and the opening of the competition for the Share Prize, the award dedicated to art in the digital age.

This edition of the festival will be led by artistic director Bruce Sterling, American author, journalist, editor and critic and Share Prize will be curated by Jasmina Tešanovic.

Two hundred years ago this year, “Frankenstein” was first published. The author kept herself anonymous, so that no one would guess that she was a radical teenage feminist who had run off to Italy. Victor Frankenstein is a bright Swiss college student with a private lab. Victor secretly hacks dead bodies and builds a giant. One dark night, Victor “infuses the spark of being” into his superhuman creation.

But “Frankenstein’s Monster” never gets a name. He does have a mother — Mary Wollstonecraft Shelley — but he has never had any legal identity, not for two hundred years. Illegal, unethical, penniless and not even human, he’s the ultimate clandestine refugee. This Nameless One has no family, no friends and no legal papers. He’s a citizen of nowhere, lurching off the design table into a troubled, fragmented world of epic Greek mythic passions and torch-and-pitchfork mob riots. The Nameless One wanders the globe. He listens and learns by spying on people. Often he does free favors, and even works hard for no pay. Yet despite all these conveniences, people never trust the Monster. He exists; he grows ever bolder, stronger and more capable; but he can never really be one of us. When he “friends” people, the alien becomes even less human. He becomes a troll; he rants, rages, demands a female soul-mate, and plots cruel reprisals on innocent brides. Those who know him best are the ones who dread him worst.

Must the Modern Prometheus suffer for his gift of fire?

Must he be chased down with torches by an angry and panicking user-base?

Will Silicon Valley ever have a Hollywood happy ending?

“SHARE FESTIVAL XIII is about the many powerful entities mankind has built, that are active among us, huge, strong, unloved, scary, mythic and Romantically tragic. They are alive! — but we are the children of Mary Shelley, and of Byron’s daughter Ada Lovelace. What about them — and what about us?”

The judges will short-list six nominees for the prize, who will be invited to exhibit at the customary Share Prize exhibition in Turin in May 2018. The names of the short-listed finalists will be announced by the end of March 2018.

Call for Share Prize Xi edition Frankenstein is now open till 18th February 2018, so join us for a gorgeous Vision on art! To display our marvelous topic on Frankenstein and to play with every possible response to monstrous aspect of technology. 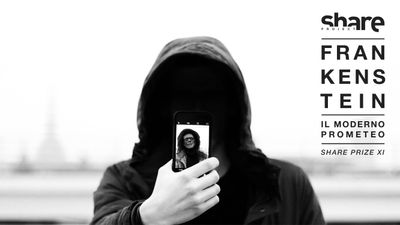